He qualified as a Chartered Accountant with KPMG in London in 1978. In an audit environment, Michael became somewhat cynical of the ‘true and fair view’ practising accountants signed up to and frustrated by his inability to influence the results on which he as an accountant was reporting. So he leapt out of pure accountancy and into the world of commerce, largely in ‘Finance Director’ and business consultant roles.  He has worked for a number of companies in the UK, often for US parent companies, and in a variety of industries including vending, telecoms and software.

This freed his innovative, entrepreneurial instincts to work in cutting edge areas: he was part of the team that delivered the first Internet on TV; invented a vending system – which within a year was selling 7m cups.  Michael has also proven adept at solving intractable problems, such as finding a buyer for a business when the immediate alternative was closure.

For software companies, as well as keeping the books and creating tax-efficient employee share option schemes, he was frequently involved in software sales with value ranging from as little as a few pounds per month up to a multi-million pound sale which would completely reshape a household-name insurers’ back-office processes.

In 1990 Michael set up Coffee Direct to sell fresh coffee systems to offices and became the first supplier of coffee products to Viking Direct, soon afterward selling the business to a Vending company. In 1998 Michael established Growth Phase Europe to provide a service to rapidly growing US dot com companies trying to establish a presence in Europe. Following an unsolicited approach, this was sold two years later to a Belgian company which went on to become part of Gorilla Park in the Netherlands.

With a taste for independence, Michael started as a  business consultant and has now worked with over fifty clients, providing help with business planning, fundraising, share option schemes, quiet advice for the CEO and several roles and interim or part-time FD. 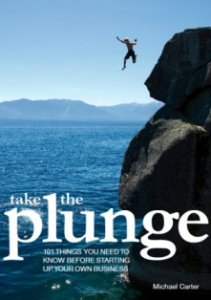 Many would-be start-ups have enlisted help and advice from Michael – machine tool manufacture, vodka importing, dating parties and premiere-mark car sharing being among the more memorable – but Michael was constantly surprised at what they didn’t know about basic business matters and even the right questions to ask.  Ever up for a challenge, in 2004 he wrote ‘It’s all cobblers!’ (published by Management Books 2000) as a complete guide for would-be entrepreneurs before setting up in business.

Not satisfied that he’d adequately addressed the core business need in his first book, nor that other so-called ‘business start-up’ books do, in 2010 Michael wrote ‘Take the plunge – 101 things you need to know before starting your own business’.